This weekend I had the pleasure of witnessing a bit of magic right here in town at Richmond’s TheatreLab Basement.

Jason Robert Brown’s musical ‘The Last Five Years’ is one of the most unique pieces of theatre to be produced in the last twenty years. Instead of lavish sets and a ‘cast of thousands,’ the play is simply a series of monologues-in-song, alternately performed by the play’s only two characters, Jamie and Cathy. In this production, which is a partnership between TheatreLab and Yes, And! Entertainment, ambitious young writer Jamie is portrayed by Alexander Sapp, while Christie Jackson is struggling actress Cathy.

What sets this work apart from your usual ‘boy meets girl’ musical is that the characters tell the story of their relationship from meeting to marriage to divorce, but they tell it from opposite ends. The very first number, ‘Still Hurting’ shows Cathy at the end of the relationship, in pain and in pieces. That Jackson is able to immediately grab the audience and hold them in her hand as she crumbles in front of them is awe inspiring. Lest you think it’s a complete downer, the very next song ‘Shiksa Goddess’ brings us Jamie just as he’s met Cathy. Sapp bounces along the minimal stage, smiling ear to ear, possessed with the youthful exuberance that the potential of a new relationship brings. Throughout the show, each person tells their story from their point of view with almost no interaction with the other performer.

The Basement performance space is very intimate: about 40 seats, a barren wood plank stage with two benches. Even though the space is sparse, the audience is captivated by a fantastic piano and string ensemble (directed by John-Stuart Faquet), a masterful score, nuanced stage direction from Chelsea Burke, expert lighting, and most importantly, two stupendous actors who move from joy and humor to heartbreak and sadness with a smooth effortlessness that is a wonder to witness.

I urge you to go see this show. You’ll be supporting great local theatre, you’ll see a truly mesmerizing performance, and, as you watch Jamie and Cathy on the carousel that is their relationship, you’ll undoubtedly see a bit of yourself in those two characters.

This engagement will sell out, so I advise you to purchase your seats before they’re all gone. The run resumes Thursday September 28 and plays every Thursday, Friday and Saturday night , Now EXTENDED thru Saturday October 28! All shows start at 8pm, seats are general admission and are $30.

Don’t miss it, because I assure you, this production will be talked about long after the final bows have been taken. It is that good, and it is that memorable, so go…be ‘a part of that.’

Wednesday night (09.20), Adam Ant brought his ‘ANTHEMS’ Tour to The National, and as promised, the evening was a wonderful flashback to the 80’s and the early days of MTV. More than that, though, the night was a testament to a performer who has survived the height of 80’s success (and excess), battled mental illness, and come out the other side. Perhaps he was surprised to find his fans were waiting for him when he returned to the recording studio after a 17 year hiatus in 2013? Whatever the reason, this tour is a celebratory nod to the past, and it’s also undeniable proof that Ant (real name Stuart Goddard) still has ‘It’; that star quality charisma that demands you watch him (and only him) as he commands the stage.

Wearing a cowboy hat in lieu of his trademark pirate garb, and clad head to toe in black leather, Ant opened the show with a song originally only available on the cassette version of 1980’s ‘Kings of the Wild Frontier’, the punk-tinged ‘Beat My Guest’, played at such a fast tempo that it was almost a thrash number, daring a mosh pit to materialize. For the first twenty minutes, each song came without a break for a breath; ‘Vive Le Rock’, ‘Dog Eat Dog’, ‘Friend of Foe.’ It wasn’t until about the sixth or seventh song in the set when Ant stopped to say ‘Hello Richmond’ and acknowledge the crowd, mainly so everyone onstage and in attendance could catch their breath.

The biggest cheers of the night came when the two biggest US singles were featured toward the end of the set, ‘Strip’ and ‘Goody Two Shoes’, which were both MTV staples throughout the early 80’s, and a blistering version of ‘Kings of the Wild Frontier’; but as the opening number proved, Ant isn’t adverse to throwing in a deep cut (‘Greta X; ‘B-Side Baby’) to keep things interesting for the longtime diehard fans.

As Goddard approaches his sixty-third birthday, he appears the happiest and healthiest of his entire career, which is a wonderful triumph. I admit that I bought a ticket to this show only because the tour was called ‘Anthems’ and I knew I would hear ‘the old songs,’ but after seeing Adam Ant in concert one time, I will see him next time and every time he’s nearby, even if the setlist is full of songs I don’t know. In this age of carbon copy bands, it was a pleasure to witness a pop pioneer proving he’s still at the top of his game, a bit older and a lot wiser.

Room at the Top

Desperate But Not Serious

Gotta Be a Sin

Kings of the Wild Frontier

Richmond writer Bo Wilson’s latest creation, ‘Food, Clothing, & Shelter’ is anything but the ‘typical theatre going experience.’ For starters, it’s staged at The Firehouse Theatre, a local space that I have always had a soft spot for because it is able to be funky, inviting and intimate all at once, which suits this production perfectly. As you enter the building and grab a program, you are greeted by ‘circus freaks’— A man with a boa constrictor around his neck, a woman doing hula hoop tricks and a man offering a game of three card monte. Within seconds, you know that this will not be a ‘typical’ evening. It’s an exercise in ‘Immersion Theatre’ where the audience and cast have the chance to interact. For some theatergoers, this may seem awkward or uncomfortable. Even if you fall into that category, don’t let that stop you from seeing this show while you can.

It’s 1927 and as the play opens, The Yankee Doodle Circus Train has derailed and left its passengers stranded in the very small town of Vinton, Indiana. Over three scenes, the circus folk interact with the townspeople in hopes of obtaining food, clothing and shelter for the penniless troop.

The results are at times hilarious, sweet, and deeply moving.

The cast, which includes Kirk Morton, Frank Creasy, Foster Solomon, Keisha Wallace, Rebecca Turner and Donna Marie Miller along with many other ‘roustabouts’, is able to convey in three scenes how we are all more alike than we are different and, no matter if you’re from Small Town, America or a passenger on The Circus Train, all of us are, in our unique way, freaks, trying to find our way and gain acceptance.
I could write a lot more about this play, but I don’t want to give anything away and, more importantly, I want you to go see it! I will simply say that I did not have any idea what to expect as I walked in, and by the time of the final bows, I was deeply moved, knowing I had seen something that I will carry with me for a very long time.

You can see eveing shows at 7:30 on Wednesday, September 13 thru Friday, September 15 and then your last chance to catch it is a Sunday matinee at 3:00pm on the 17th. You might be hesitant, because it’s different, but trust me. Go see this show.

You can thank me later.

I have been lucky to have had a group of friends that I have kept in touch with for over 25 years. At some point in the mid-1990s, the group was named ‘The Hearts Club’ because a rotating group of us would meet at my house in Midlothian to play Hearts. That group always included Patrick, Kurt, Tony and myself. Sometimes Jenne and Becca would join in. I remember one all night Hearts contest where, instead of the usual ‘penny/nickel pot’,  we bet ‘care packages’ instead (since Kurt, Jenne, Becca and Tony were in their freshman year of college; I think I still owe Becca about a dozen or so care packages from that evening!).
When Patrick announced in the spring that he was getting married, I was thrilled – happy for him and his bride Cecelia, but equally happy at the prospect of seeing friends I had not seen for far too long. It seemed the last few times members of ‘The Hearts Club’ had gathered, it was for a funeral, so I could not wait to be able to gather, drink and laugh.

Here are some pictures. To Tony, Jesi, Josh and Justin, who were not able to attend: You were missed and thought of throughout the evening.

Mother of the groom, Pauline, and Patrick 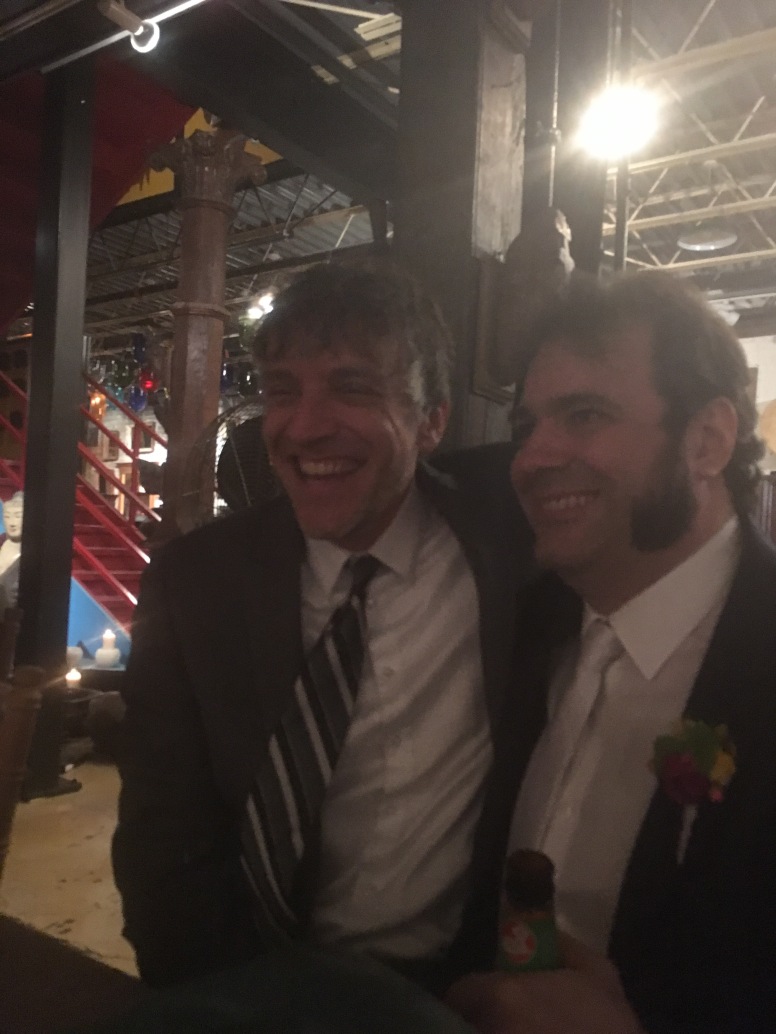 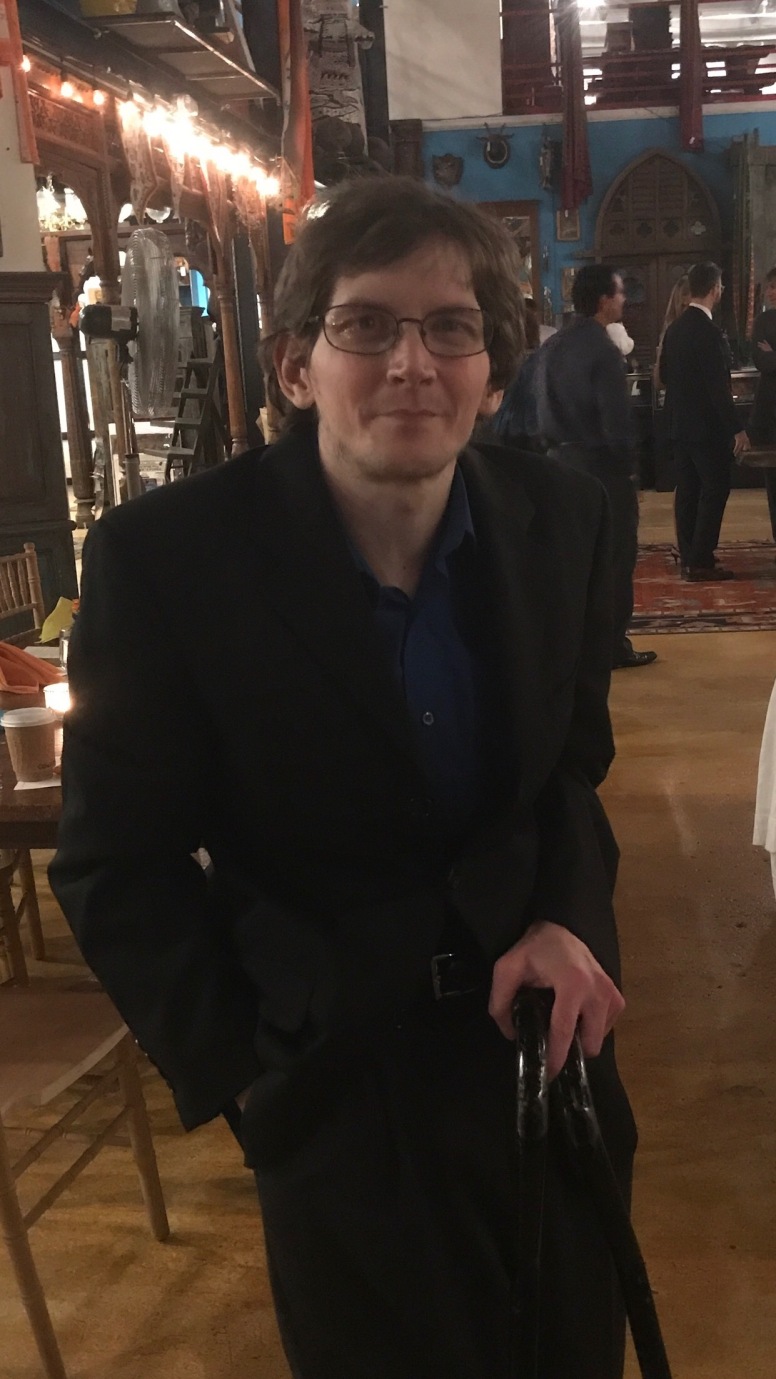 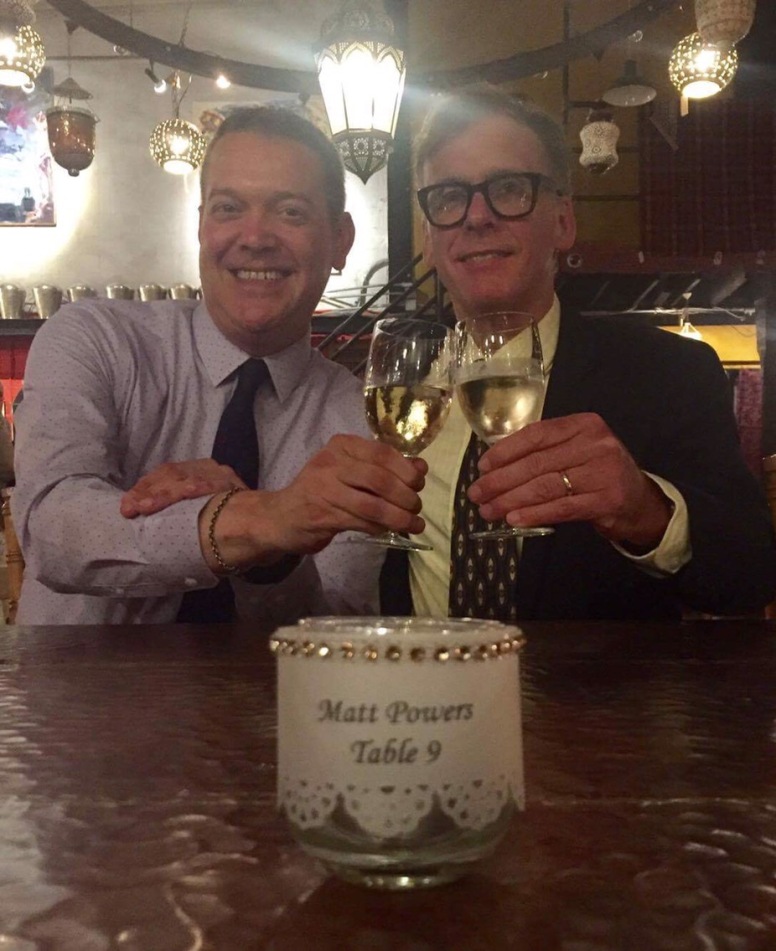 Matty K. and John P. A seating snafu combined them into one ‘person’: Matt Powers

Having a free night with little to do, Obama showed up, pictured here with Kurt and Valeria 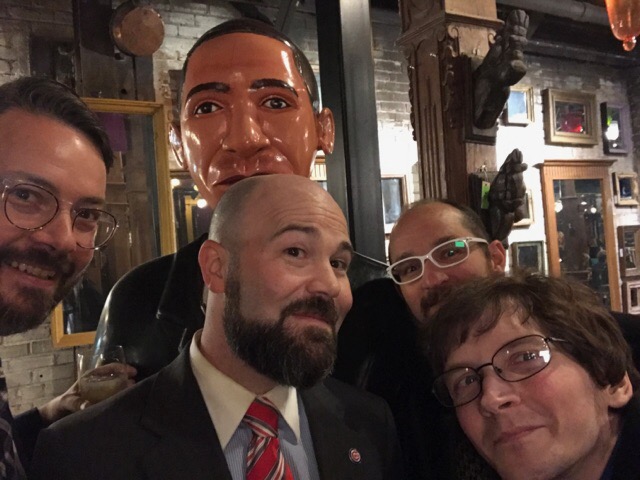 All smiles: Matty, Becca and me

All of those pictures were taken at the reception, which took place at the very cool and funky antique store Material Culture. As the clock struck 11pm, the entire group, all at varying levels of inebriation, boarded a trolley back to the hotel and then within thirty minutes, the After Party began in Becca and Matty’s hotel room. The pictures below were taken there. Please note all were (at least somewhat) Intoxicated. Including the photographer. 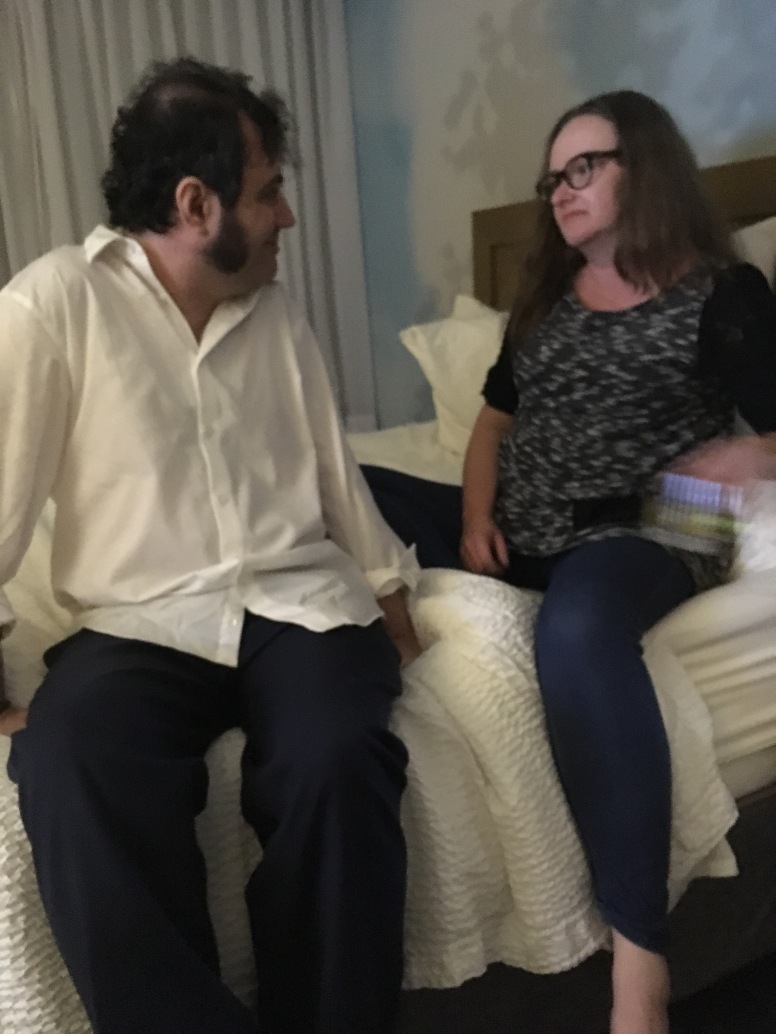 Patrick and Jenne, holding a blurry bag of chips

I think at this point, Patrick had no idea where he was or what he was saying.

On three, everyone LEAN!!!

It was a wonderful, memorable weekend. Here’s hoping it’s not too long before we all gather again, to smile, drink and laugh.
Love always,  Barry