This weekend I had the pleasure of witnessing a bit of magic right here in town at Richmond’s TheatreLab Basement. 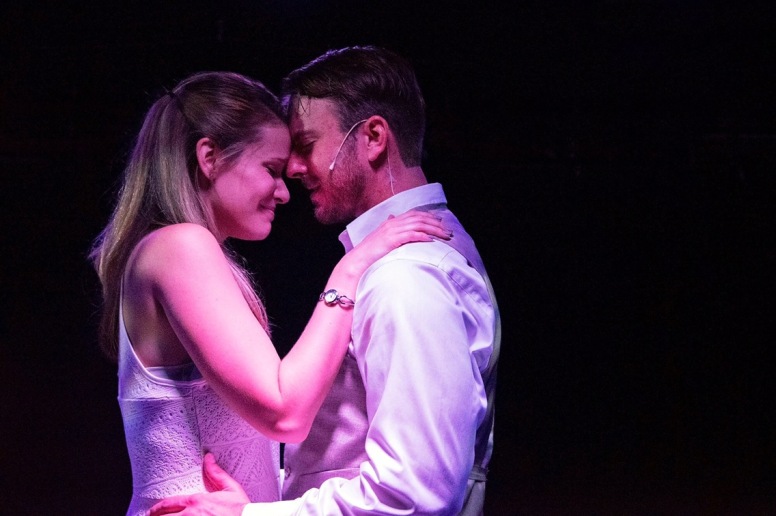 Jason Robert Brown’s musical ‘The Last Five Years’ is one of the most unique pieces of theatre to be produced in the last twenty years. Instead of lavish sets and a ‘cast of thousands,’ the play is simply a series of monologues-in-song, alternately performed by the play’s only two characters, Jamie and Cathy. In this production, which is a partnership between TheatreLab and Yes, And! Entertainment, ambitious young writer Jamie is portrayed by Alexander Sapp, while Christie Jackson is struggling actress Cathy.

What sets this work apart from your usual ‘boy meets girl’ musical is that the characters tell the story of their relationship from meeting to marriage to divorce, but they tell it from opposite ends. The very first number, ‘Still Hurting’ shows Cathy at the end of the relationship, in pain and in pieces. That Jackson is able to immediately grab the audience and hold them in her hand as she crumbles in front of them is awe inspiring. Lest you think it’s a complete downer, the very next song ‘Shiksa Goddess’ brings us Jamie just as he’s met Cathy. Sapp bounces along the minimal stage, smiling ear to ear, possessed with the youthful exuberance that the potential of a new relationship brings. Throughout the show, each person tells their story from their point of view with almost no interaction with the other performer.

The Basement performance space is very intimate: about 40 seats, a barren wood plank stage with two benches. Even though the space is sparse, the audience is captivated by a fantastic piano and string ensemble (directed by John-Stuart Faquet), a masterful score, nuanced stage direction from Chelsea Burke, expert lighting, and most importantly, two stupendous actors who move from joy and humor to heartbreak and sadness with a smooth effortlessness that is a wonder to witness.

I urge you to go see this show. You’ll be supporting great local theatre, you’ll see a truly mesmerizing performance, and, as you watch Jamie and Cathy on the carousel that is their relationship, you’ll undoubtedly see a bit of yourself in those two characters.

This engagement will sell out, so I advise you to purchase your seats before they’re all gone. The run resumes Thursday September 28 and plays every Thursday, Friday and Saturday night , Now EXTENDED thru Saturday October 28! All shows start at 8pm, seats are general admission and are $30.

Don’t miss it, because I assure you, this production will be talked about long after the final bows have been taken. It is that good, and it is that memorable, so go…be ‘a part of that.’