How do you write down your thoughts on something that you didn’t realize you had been waiting to witness for almost twenty-five years? I’m still not sure, but I will attempt to do just that. First though, a bit of history.

At some point in the mid-90s, I was introduced to the music of Sebadoh by way of a mix tape from my friend Jenne. The song was ‘Rebound’, and while I was not really a fan of ‘lo-fi’ recordings, lead singer and songwriter Lou Barlow’s lyrics hit me like a bullet. I remember soon after hearing that first mix tape, a trip to Sam Goody at our local mall where I went with the express purpose of buying a CD EP that had acoustic versions of ‘Rebound’ and ‘Magnet’s Coil’, although I did not voice this out loud to my friends (at least I don’t think I did). Sam Goody had only one copy (in hindsight it’s remarkable they even had one copy) and one of my friends claimed it before I got there. That friend made sure that all of the acoustic tracks from that EP were included on the next mix I got from them.

In the late 90s and early 2000s, I saw Sebadoh three times in concert. Each time was very memorable (especially a 2004 show at The Khybr in Philadelphia). Each show, while memorable, never included ‘Magnet’s Coil’ in the set. I wasn’t disappointed, because those shows still rocked, but I kept hoping with each successive show that ‘maybe this time’ would be the night when I would hear a live take of ‘Magnet’s Coil.’

Fast-forward to March 2018 when Patrick posted on Facebook that he had just acquired tickets to see a solo acoustic show by Lou Barlow in Philadelphia. I had no idea Lou was touring so, after reading Patrick’s post, I saw that Lou had a Facebook page and there was a list of tour dates. Two nights after the April 9 Philly show, Lou was going to play in Richmond! I had never heard of the listed venue, but even without knowing anything else about the show, I immediately bought a ticket.

About the venue: This show was booked at ‘MOTO RICHMOND’ which is in fact a scooter store, so the backdrop for the performer was a line of Vespas along with many motorcycle/scooter accessories and lights. I can’t say enough about how great the staff were. They made sure I had a chair, although I was more than prepared to stand for the entire show. When I walked into the performance area, it wasn’t very crowded. Thankfully a few minutes before show time when I looked behind me, the room had filled to probably seventy people. 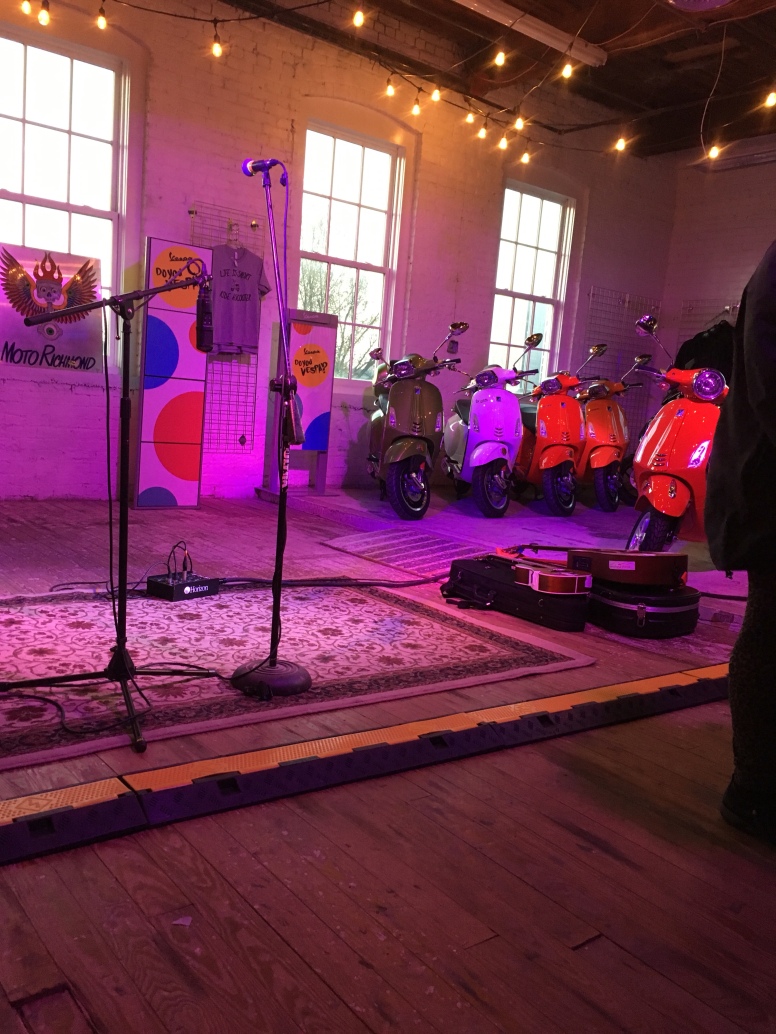 As pre-show music blared from the PA system, Lou nonchalantly walked out dragging a suitcase of merchandise. He stowed that behind a counter at the front of the venue, then he began to set up his three guitars. By ‘set up’ I mean he took them out of their cases and leaned them against a hardback chair in a way that if someone had sneezed, they would have fallen.

Just past 8:00pm Lou sat down on a stool and asked everyone else to sit down. ‘I would stand up, but you’re still not going to be able to see me unless everyone sits down.’ Since this place was a store and not built for live music, the performance area was all on one level so having everyone seated was the only way for anyone not up in the front to see the show.

After tuning his guitar, Lou surprised us by opening with ‘Cold As Ice’ by Foreigner. He followed that with a verse and a chorus of Bryan Adams’ ‘Run To You’ before he messed up, stopped abruptly and announced, ‘Okay, now I’ll play some of my songs.’

Then he started playing the intro to ‘Magnet’s Coil,’ an intro to a song I have listened to thousands of times over the last twenty-plus years. 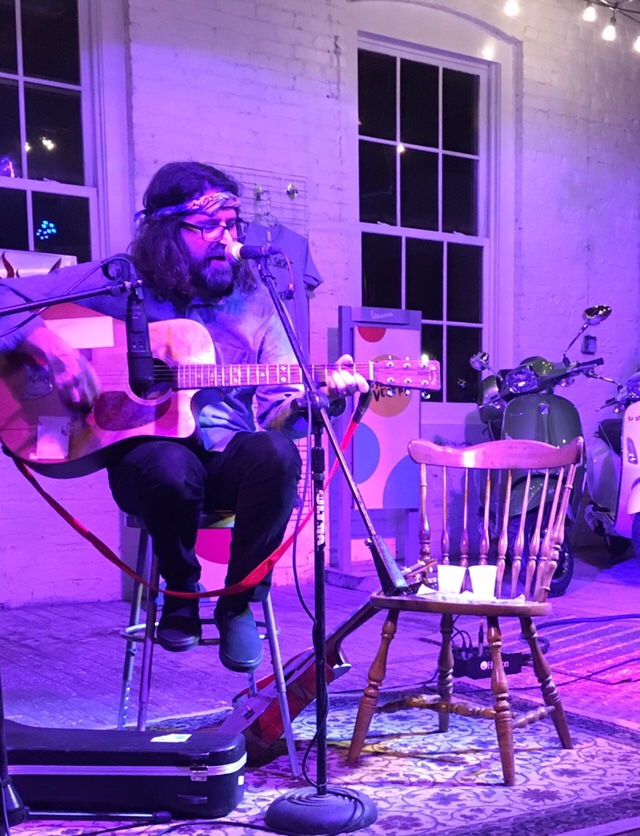 From that point forward, the rest of the evening is a wonderful, nostalgic blur. I remember snippets of moments, and I remember telling myself ‘Don’t lose it, keep it together!’ As each song washed over me, I was filled with memories of friends that I haven’t seen in too long, hours spent talking and playing cards while these songs played in the background. Memories came fast and sharp: The night I quoted a verse from ‘Rebound’ at a Waffle House during a discussion about dating; the morning where a friend left the lyrics to ‘Magnet’s Coil’ written in ink on four sheets of folded paper in my mailbox, and the time a friend gifted me three mix CDs of Sebadoh music. As I remembered all of this and tried to take in the actual show, it all became the aforementioned wonderful, nostalgic blur as the forty-something year old me melted away to reveal the twenty-something year old me. And I was okay with that.

Here is a partial setlist from the website setlist.fm with a few additions based on my blurry memory:

Back to your Heart

This show had everything I could’ve asked for: An attentive audience (minus the intoxicated guy who kept asking Lou to play songs he didn’t write), Lou telling many stories about songs (especially a detailed explanation on how ‘Ballad of Daykitty’ was written) and, as the partial setlist shows, the songs that I wanted to hear, that I didn’t realize I had been waiting to hear, the songs that I needed to hear. The only thing that could’ve improved the evening was to have seen it with those friends who made me a Sebadoh fan in the first place. While that didn’t happen, I did see this show with a friend, Christi, who attended even though she had not heard a note of Sebadoh music until the ride to the show (she did know Dinosaur Jr. though and I had completely forgotten to mention that Lou was the bassist in that band when talking to her about the show). By the time the evening was over and we were walking back to the car, Christi announced that she ‘would definitely see Lou again if he returned.’ So, like my friends made me a fan in the 90s, I’ll take credit for making Christi a fan.

In closing, a quick sincere thank you to Jenne, Jesi, Patrick, Tony and Kurt for exposing me to the music of Lou Barlow and Sebadoh, and for being among those who ‘get’ why this guy is so great. You were thought of fondly on this night. Thanks to Kati for taking a friend’s advice and coming to the show literally minutes before Lou started. And special thanks to Christi for being there to share a show that I think I can safely say neither one of us will ever forget. 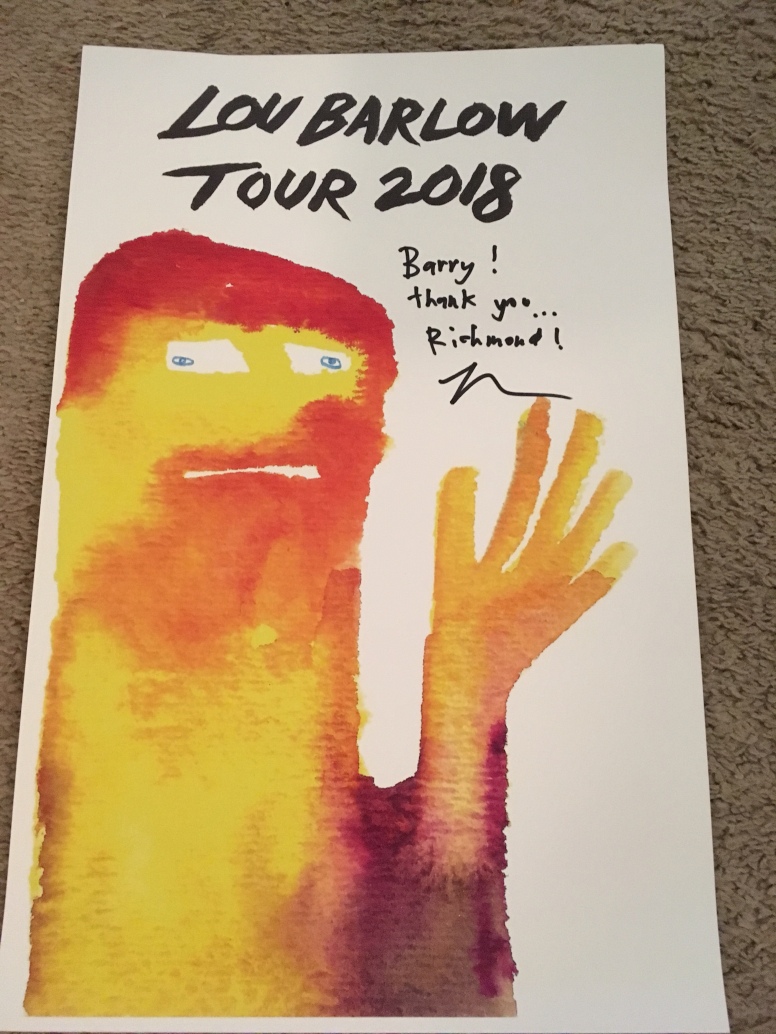 Thank you for reading (indulging) my attempt to describe an evening that left some sobbing, and left me truly speechless. But again, perhaps Lou sums it up best:

‘If there’s a right thing to say