I have been lucky to have had a group of friends that I have kept in touch with for over 25 years. At some point in the mid-1990s, the group was named ‘The Hearts Club’ because a rotating group of us would meet at my house in Midlothian to play Hearts. That group always included Patrick, Kurt, Tony and myself. Sometimes Jenne and Becca would join in. I remember one all night Hearts contest where, instead of the usual ‘penny/nickel pot’,  we bet ‘care packages’ instead (since Kurt, Jenne, Becca and Tony were in their freshman year of college; I think I still owe Becca about a dozen or so care packages from that evening!).
When Patrick announced in the spring that he was getting married, I was thrilled – happy for him and his bride Cecelia, but equally happy at the prospect of seeing friends I had not seen for far too long. It seemed the last few times members of ‘The Hearts Club’ had gathered, it was for a funeral, so I could not wait to be able to gather, drink and laugh.

Here are some pictures. To Tony, Jesi, Josh and Justin, who were not able to attend: You were missed and thought of throughout the evening.

Mother of the groom, Pauline, and Patrick

Matty K. and John P. A seating snafu combined them into one ‘person’: Matt Powers

Having a free night with little to do, Obama showed up, pictured here with Kurt and Valeria

All smiles: Matty, Becca and me

All of those pictures were taken at the reception, which took place at the very cool and funky antique store Material Culture. As the clock struck 11pm, the entire group, all at varying levels of inebriation, boarded a trolley back to the hotel and then within thirty minutes, the After Party began in Becca and Matty’s hotel room. The pictures below were taken there. Please note all were (at least somewhat) Intoxicated. Including the photographer.

Patrick and Jenne, holding a blurry bag of chips

I think at this point, Patrick had no idea where he was or what he was saying. 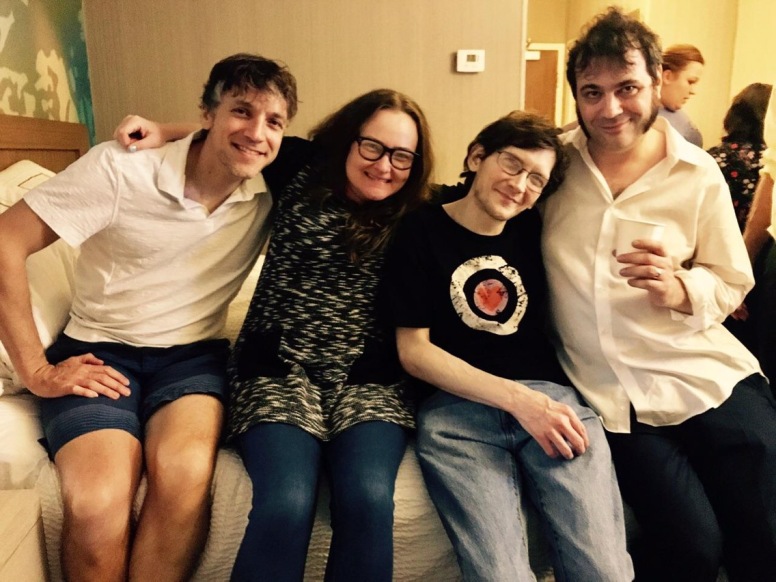 On three, everyone LEAN!!!

It was a wonderful, memorable weekend. Here’s hoping it’s not too long before we all gather again, to smile, drink and laugh.
Love always,  Barry