Here again is my usual disclaimer I post when writing about Taylor Swift: I’m unabashedly, unashamedly a fan of Ms. Swift and her music. If you’re searching for a truly objective critique of the new record, you probably won’t find it here.

Okay, now onto the business at hand. 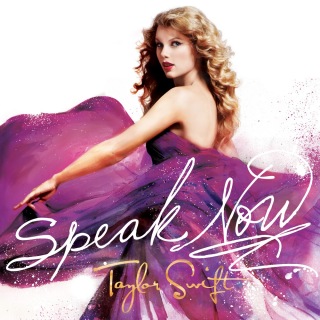 She had the top selling album of 2009, a completely sold out US tour and has spent the past two years seemingly in the full glare of the spotlight. But, through it all, Taylor Swift has remained the same person she was before this whirlwind of a career started. It’s only been just over four years since she released her debut album at sixteen, and now she’s a multi-platinum selling artist who’s latest record has been touted by some writers as the one ‘that will save the record industry’ in terms of sales.

No pressure. No, really, she seems to feel no pressure, at least she doesn’t show it.

Penning all fourteen songs herself, her songs deal with things that have happened to her over the last two years. So, naturally, there’s a song about that little incident at last years MTV Video Music Awards, [Innocent], there’s a song about her ex-boyfriend Taylor Lautner [Back To December] and  one that is a none too veiled kiss off to John Mayer [Dear John]. If you’ve followed the celebrity pages at all, then you know what Taylor’s up to, and thus, you know what these songs are about. In her earlier songs, like ‘Teardrops On My Guitar’ or ‘Hey Stephen’ she would name names. Now she doesn’t have to because everyone knows exactly who she’s talking to, or about. Even if she won’t admit it in an interview.

Yes, they’re personal songs. But, the songs are not unrelatable for the listener. Everyone’s lost at love, had to apologize to someone, been in a bad relationship; Swift just gets to do all of that [mostly] in the public eye.

Some in the country establishment have cried foul for years saying Taylor is anything but country. While it doesn’t seem like she’s trying to be a specific genre, ‘Speak Now’ does have two songs that probably sound more country than anything on her last multi-platinum effort, Fearless: ‘Mean’ and ‘Never Grow Up.’ Those acoustic gems are right alongside tunes like the disco flavored ‘Story of Us’ and the dreamlike soundscape that makes up what I consider the album’s highlight, ‘Enchanted’.

It could be a tricky situation for some, trying to grow up in the spotlight, with so many looking forward to what you have to say next. Swift has grown up a lot over the last two years and her maturity shines on this record, but nothing here sounds forced or calculated to be a hit [but who are we kidding? This album will be platinum in two weeks anyway!] Amid all the buzz this album has, the underlying fact is that the songs are strong and radio-ready.

With all of the music world watching and waiting on her, Swift has delivered a very personal, direct record that builds on the success of Fearless  without sounding like Fearless Part Two. Will this win her any new fans? Maybe. But it you’re not a fan already, then you probably won’t be.
That’s okay. You’ll be the one missing out on all the fun.