No lie, every year for me, the longest week on the calendar is Major League Baseball’s All Star Game week, where no regular season games are played from Monday through Thursday. I survive without baseball in the offseason because I have to, but to yank it away for almost a full week in the heart of summer to play an exhibition game makes for a long week. This year though, this week has been one of the longest ever.

If you know me at all, you know that one of the few things I love/need more than baseball is music. Since 2005, I have primarily used a digital music player to listen, selling almost all of my CDs and vinyl to convert to the digital age. In 2005, I bought a Nomad Zen Xtra Jukebox after my dear friend’s then-current boyfriend brought his to a party. I was fascinated by it and ordered one from Amazon the very next day. I loved it. It was built like a brick, withstood drops (which didn’t happen often) and was reliable and stable. At about 30GB of memory, it took a while to fill up, and I was careful not to repeat songs on the player; if I owned a record by a group and then bought a Greatest Hits collection, any songs from that record that were on the Greatest Hits collection did not get transferred a second time onto the player’s hard drive. Eventually though, in the spring of 2008, the player became so full that it would skip during playback on almost any song. I had pushed it to its limits and I knew I needed something else; a digital music player that had at least three times the capacity of my little Zen Xtra Jukebox.

At first I intentionally tried to avoid purchasing an iPod. Keep in mind, I worked on PCs, had a PC at home, and was a newly Certified Microsoft Technician; seemingly everything in my life was Anti-Apple. But as I did research and asked friends what they recommended, the answer was unanimous: ‘Get an iPod!’

So in July 2008, I bought a 160GB iPod. And thus began my love/hate relationship with Apple and, most importantly, iTunes.
From day one, my iPod was with me, in my pocket; as necessary as my wallet, phone and house keys. I babied it, making sure not to scratch the screen or scuff the case. I think I only dropped it a handful of times, and it never got dropped outside, so carpet was usually the worst surface it hit at high impact. Going from 30GB to 160GB was quite a jump, and I remember spending most of the summer of 2008 in front of my PC, converting my CDs to digital files for iTunes.

In 2010 though, I had my first issue with iTunes. I woke up one day, got ready to sync my iPod before going to work, and my entire iTunes library was gone! Deleted! Erased!! I had to head out the door to go to work, but I was distracted all day, wondering how it happened and how it could be corrected.

The way iTunes works is as follows: iTunes is the master and, when a device is synced to iTunes, whatever is in that iTunes library will be synced to the device, so if your device has more songs than the iTunes library (which was absolutely the case after my iTunes was mysteriously wiped out) the songs on the device will be lost. Had I synced my iPod without noticing that I had zero songs in the iTunes library, my iPod would have been erased as well. Thankfully, I still had my entire library on my iPod. I’ve had a few issues with iTunes through the years, but the iPod device has always been stable and withstood the heavy use I put it through. I eventually repopulated my entire iTunes library by using a great program, ‘iPod to PC’ which takes what is on your device and copies it to iTunes. I have needed to use that program quite a few times to overcome iTunes issues that caused loss of data.

Remember, this is an iPod with the ‘click wheel’ or disc. The Play/Pause button is at the bottom of the wheel and, about a year ago, the Play/Pause button started to fail to respond intermittently. It was bothersome, but after a few clicks, the button would engage and I would go on with things as usual. That was the biggest issue, having to sometimes use a remote to pause the iPod when it was connected to my portable speakers.

Tuesday morning, as I went to connect the iPod to the portable speakers, it was completely dark. Hitting the MENU or SELECT buttons would usually bring it back to life, but it remained dark. I plugged in the speakers and put the iPod in its slot so that it had a power charge. Then the screen lit up and I could see the ‘LOCK’ icon was lit, even though the actual lock button was in the unlocked position, and I have never used the lock feature. I knew instantly that the device was now permanently locked, and no matter how many times I toggled the lock button or attempted to do a ‘hard reset,’ the iPod was not going to respond. I knew this, but even so I kept trying all day at work, hoping letting the battery run down would release the lock (it didn’t). 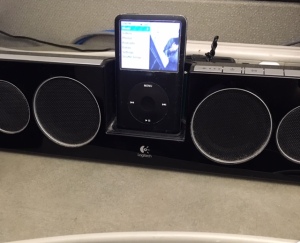 The iPod: Lit up, but dead inside

So, for someone that listens to music via my iPod for a minimum of six or seven hours a day, Tuesday, Wednesday and Thursday were very long days. I intentionally removed 90% of music from my phone, mainly because I didn’t want to use iPhone space for things that were already on the iPod. So, earlier this week, going from having 16,500+ songs to about 40 was quite a drop!

Thursday I did some research and discovered that Spotify has an ‘Offline Mode’ where you can listen to music without using data. At work, I don’t have Wi-Fi so Pandora was out as an option. I found out (thankfully) I did not have to listen to music in real time in order to add them to my Offline Library. I had to sign up for a premium membership (which has a free trial) and then I could just pick out albums and click a button to download it to my phone.

I’ve been out of sorts all week, first with no baseball and now no iPod. Spotify is helping a lot, and made Friday at work go by faster than the other days of this week had. I’m still debating what to do next; get my iPod repaired or buy a used iPod Classic on eBay. This weekend I will do a “Factory Restore” which erases all data on the iPod, and then re-sync my library back to the iPod, assuming a Factory Restore removes the LOCK mode. If it doesn’t, then my decision is made, and if it does remove the lock, it will take a minimum of 30 hours to transfer all of the data from iTunes back to the iPod.

What infuriates me about Apple in this instance is that they no longer make any iPod with a hard drive bigger than 64GB. So, since my iPod has 132GB of data, I would need to buy two iPods in order to have all of my music/videos available, and that would leave no room for growth, which is what makes the 160GB iPod so perfect; it holds everything I have and it still has a considerable amount of space left for new music to be added.

I resisted the ‘Culture of Apple’ for a long time, but after the iPod purchase in 2008, I got an iPad in 2010 and finally an iPhone in 2013. Now I am all in, just as the company moves away from devices to the iCloud (and don’t even get me started on the nightmare that is Apple Music and iTunes Match). I feel like I am the owner of a broken down 1968 Mustang. It was a classic at one time, but it doesn’t run and, while I’ve been using the Mustang, the world has moved on to smaller, more fuel efficient cars. My iPod Classic is not only a classic, it’s an antique, and this week, it’s an antique that only functions as a paperweight.

As I say daily at work, ‘Technology is great when it works.’ When it doesn’t work, it really sucks. And it leaves its owner out of sorts.

Thank you for reading.