Al Stewart is one of those artists whose name instantly evokes the 1970s. He had been a singer/songwriter since the mid-60s, releasing albums that were full of stories, but no radio friendly songs. Then in 1976, Stewart suddenly had a Top Five album on the US Charts and a Top Ten Single with ‘Year of the Cat,’ a song that sounded like nothing else on the radio.
That song, along with a few others from the 70s, are what most know Stewart from, but his catalog is one that didn’t stop in 1979 when the radio listening public (and most record buyers) stopped paying attention. When Sunday’s show at the Beacon Theatre in Hopewell was announced last summer, I was shocked, and I knew that I had to attend.

The Beacon Theatre is a lovely performance space, probably holding no more than 500 people including the balcony seating. The sound quality was fantastic and a great surprise. I highly recommend seeing a show there.

One of the hallmarks of Stewart’s two most popular albums (Year of the Cat and it’s 1978 follow-up ‘Time Passages’) is synthesizer and saxophone. Being that he currently tours with only one other musician (virtuoso guitarist Dave Nachmanoff), it was apparent that the evening’s performance would sound very different from the recorded versions, and that excited me.

Early in the set, Stewart provided his philosophy of songwriting: “Write about topics no one else writes about, use words no one else uses and you won’t sound like any of the thousands of other singer/songwriters out there.” The evening’s song selection was proof positive that following that philosophy has served Stewart well. And he even admitted that sometimes he ‘gets lazy and sloppy and ends up with a hit’ when introducing ‘Time Passages.’

Throughout the 90 minute show, Stewart told very funny stories about his songs (Who knew that the song ‘Broadway Hotel’ focused on sex, a suicidal woman and cheeseburgers?) and offered tight acoustic renditions of his songs. It made for a very memorable evening and a performance I felt very fortunate to witness.

With the synthesizer and saxophone stripped away, Stewart’s songs resemble the story songs of Harry Chapin and John Prine, albeit from Stewart’s unusual point of view. If you only know Al Stewart from ‘Year of the Cat’ or ‘Time Passages’, I highly recommend finding a copy of ‘Past Present and Future’ from 1973 or ‘Sparks of Ancient Light’ from 2008; both are primarily acoustic albums with only a bit of synth on the former album, and I think both records are good starting points for those that wish to explore the wonderful stories of a very underrated songwriter. 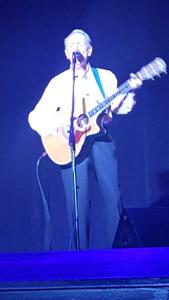 Encore:
End of the Day

Thank you for reading, and thanks as always to Dana for sharing this show with me.